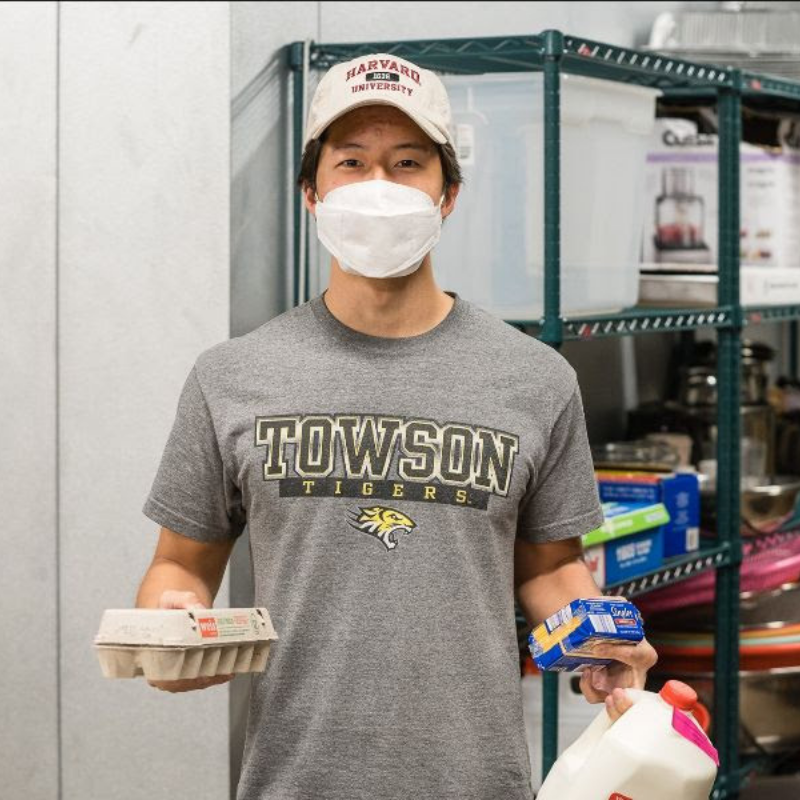 Has your church ever stepped out in faith—on short notice—to seize an opportunity to serve your community?

Bethel Presbyterian Church has been faithfully serving the Korean community in Howard County, MD, for forty years. Recently, however, they’ve responded enthusiastically to a sudden unexpected and unprecedented opportunity to partner with others from a multitude of cultures and backgrounds to serve the broader community during the ongoing pandemic.

The English Ministry of Bethel has teamed up with Columbia Community Cares (CCC), a new grassroots community effort which began rallying volunteers, starting in March, to provide food, diapers, baby formula, and personal care items to several thousand families in Howard Country who have been especially hard hit by the pandemic shut-downs, including hundreds of Hispanic, Vietnamese, African and other immigrant families who are now out of work and did not receive federal stimulus funds.

It all began when a local teacher, Erika Strauss Chavarria, stopped by her school mid–March, and saw many of her students in a long, socially-distanced line, waiting to get their free school lunch. She saw a few of them come out and share their lunch with other family members, and realized that could be the only food some struggling families would have that day. She shared with Facebook friends an idea to respond to hunger in the community by setting up tables of donated groceries outside schools providing free student lunches several days a week.

The community responded generously, and the effort has grown exponentially over the past few months. The organization’s Facebook page now has over 5,600 members and has served as a catalyst and organizing point for hundreds of individual volunteers, farms, bakeries, dairies, grocers and other businesses, and for neighborhood groups, all eager to help thousands of increasingly vulnerable families. 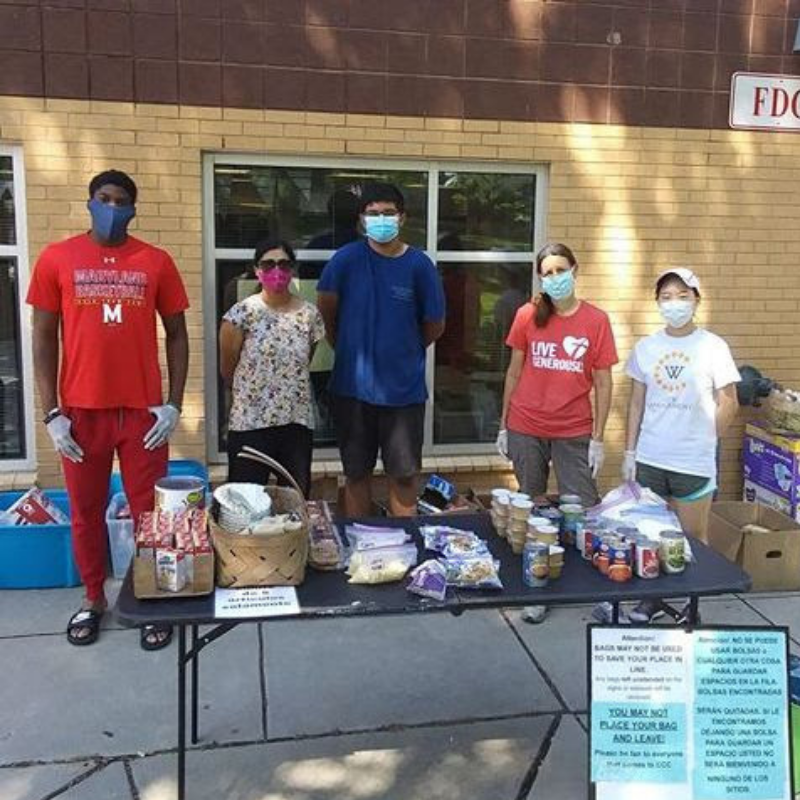 Eunice Chu began volunteering with CCC at their food distributions at local schools several hours a day several months ago. She also joined the group of volunteers who shop for and deliver groceries to those who do not have transportation to travel to the distant school distribution sites or cannot leave home for other reasons.

When CCC was a few months old, space to store donated groceries and hygiene items—and particularly items needing refrigeration—was becoming a problem, and Eunice realized her church could be part of the solution. She approached Bethel’s leadership about allowing CCC to use their brand-new kitchen area for organizing and storing donations. Her proposal was enthusiastically approved. “It’s great to see the new space being put to good use, especially in these months when we are not gathering for church!” comments Pastor of College Ministry Abraham Kim.

CCC’s strategy--and therefore Bethel’s strategy--has changed over time as the number of families they serve who are unable to leave home has grown. “We used to price things out and go to local grocery stores, Dollar Tree, etc. to get the best deals, but when we started serving up to 300 families each week, that eventually became too much work,” says Eunice. With funds donated by the broader community, as well as church donations, Bethel volunteers purchased food staples in bulk and repackaged them in family-sized containers set out on dozens of tables in a Bethel kitchen area, for “shoppers” to pick up needed groceries and hygiene items quickly and safely.

Both the English Ministry and the Korean Ministry of Bethel have contributed funds and have provided volunteers to work with CCC, either at the church building, at school sites, or doing deliveries to families. They have been delighted to have many volunteer “shoppers” of other ethnicities and faiths come through their doors to join them in serving those in need.

Pastor Kim highlights one recent college grad who has been a tremendous help in ministry this summer. Alice Choe, with fresh degrees in Spanish and Chemistry, has been helping out frequently as an interpreter at one of the school sites that serves a large Hispanic community. On some days she interprets for dozens of families – mothers with small children expressing their very crucial needs for basic items. “Even though she lives only 12 minutes from the site, Alice is amazed and touched by the extent of the need and the changing demographics. She has brought her younger siblings along on grocery deliveries, which led to great discussions about the importance of compassion for those in need,” observed Pastor Kim.

"Through our involvement with CCC, I have seen whole families in our church serving together. I have seen students and young adults who previously were not very involved in the church now serving regularly with friends. Working with CCC has brought various groups of our church together in a way that has been such a blessing!" 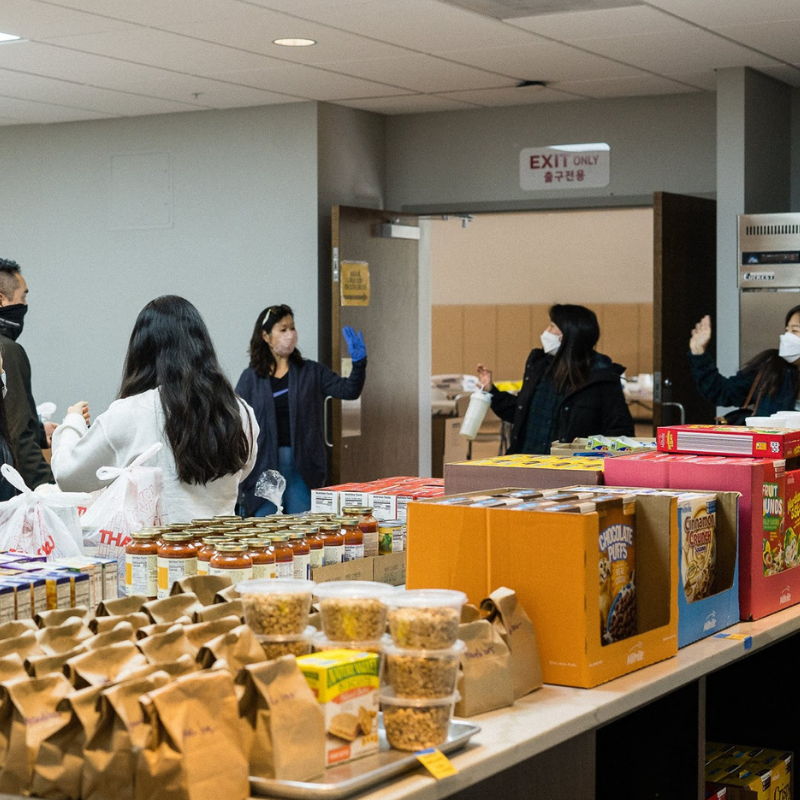 “Because of our participation with CCC during the pandemic,” says Eunice Chu, “our church is now much more known in the community than we were before.”  In fact, just in the past few weeks, Bethel has partnered with the local health department to host several drive-through COVID testing clinics, all the while continuing their months-long food pantry effort with CCC.

Bethel’s English ministry desires to be open to persons from all ethnicities and backgrounds, and they hope to see some of the volunteers who would have never walked through their doors pre-pandemic consider returning to worship with them when the church is meeting regularly again.

Churches often think they need to focus on starting new initiatives of their own, independently, to meet community needs, but this may not always be the best strategy. It’s also important, says Ms. Chu, to "pay attention to what God is doing around you and what He’s inviting you to be a part of. Working with CCC is an opportunity we could have easily missed to show the love of Jesus as his followers. I’m so glad God led us to step up and say, ‘We want to be a part of this!’”

This story first appeared in the July 2020 newsletter of PCA Mission to North America Refugee and Immigrant Ministry. You can subscribe to their e-newsletter by emailing phatch@pcanet.org.